Document of the Roman Army in the Arabian Peninsula

[Limes arabicus]. 15 fragments of a Roman military diploma for an equestrian soldier named Bithus of the ala praetoria singularium.

Rare document of the Roman presence on the Arabian Peninsula, comprising 15 fragments in good condition. The diploma was issued for an equestrian named Bithus of the ala praetoria singularium, an auxiliary cavalry unit stationed in Syria, under the command of Aulus Furius Saturninus during the reign of Emperor Domitian (81-96). It can be dated with a high degree of certainty, as Aulus Furius Saturninus is only traceable to military diplomas issued as part of an imperial military constitution for 5 alae and 2 cohorts in Syria from 8 November 88. The name Bithus is probably of Thracian origin.

The ala praetoria singularium was one of 14 alae and 33 cohorts stationed in the province of Syria between 88 and 157. These troops built and defended the almost 1500 kilometre Limes Arabicus, a system of streets, watchtowers, and forts that had its origin in the Roman conquest of Syria in 64 BCE and reached its greatest extent in the second century. Palmyra and Damascus were among the fortified cities along the Limes Arabicus.

From the German collection of Peter Weiß, acquired before 1980. 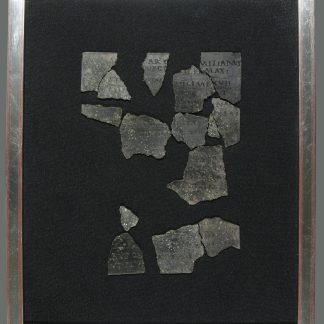