First edition of this important Utopian novel describing Niels Klim's imaginary journey to the centre of the earth. A biting critique of the rule of the Danish King Christian VI, this tale of subterranean discovery advanced to one of the most popular socio-critical enlightenment novels.

Holberg is described by Bleiler as "a one-man literary renaissance", a founder of modern Danish literature and significant contributor to the genre of imaginary voyages. While his tale is often compared with Swift's "Gulliver's Travels", Bleiler notes that "Holberg's satire is wider in scope, more penetrating in analysis, and less local than Swift's", and highlights this title as being of "international importance" - a fact further evidenced by its countless later reprintings, adaptations, and abridged versions still in print today. 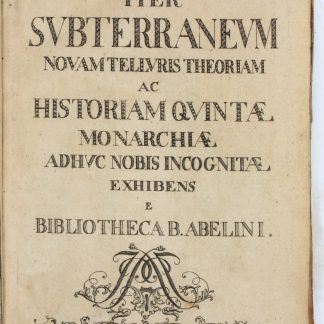