4to. Italian manuscript on paper. 19 pp.

As is typical for the genre, the text traces the biography of the recently deceased brother in broad strokes, focusing on his character, virtues, events of religious relevance, and death. We learn that even when he was among brothers who slept in beds, Storani always "put his mattress on the floor" and took his rest "without sheets or duvets", although he slept only little and spent "the better part of the night reading and studying". To preserve his "angelic chastity", Storani "never looked a woman in the face" and never visited women "except for taking confession". Ahead of his death on 18 April 1733, Storani was called to Rome to accompany the "Maestro dei Novizi". The Superior General Franz Retz and other important Jesuits were present at his deathbed and assisted in his last rites. The vita closes with the immediate aftermath of Storani's death and the veneration bestowed upon him. The mourners entered Storani's room "as if they entered the room of a saint", while a Jesuit who learned of his death exclaimed, "Saint Christopher pray for us". 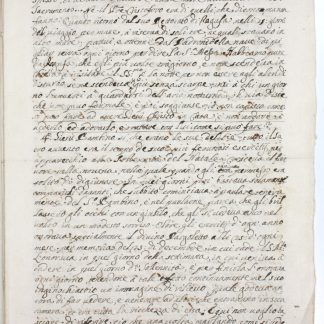