Iran, Iraq and the countries of the Levant

The Soviet Union's 1:500,000 General Staff map quadrangles showing Iran, Iraq and the countries of the Levant: Palestine and Israel, southern Lebanon, parts of Syria and Jordan. From the Russian series of maps produced during the Cold War, based on high-quality satellite imagery, but usually also ground reconnaissance. Nearly complete, with only a few lacunae at Iran's easternmost fringes and at Bandar Abbas. Assembled continuously, the quadrangles would form an enormous map spanning roughly 6 x 3.5 metres! - Products of a massive, clandestine cartographic project begun under Stalin and ultimately encompassing the entire globe, the Soviet General Staff maps are today noted for their extreme precision. Indeed, even in post-Soviet times they provide the most reliable mapping for many remoter parts of the world: "Soviet-era military maps were so good that when the United States first invaded Afghanistan in late 2001, American pilots relied on old Russian maps of Afghanistan. For almost a month after the United States began a bombing campaign to help oust the Taliban government, American pilots were guided by Russian maps dating back to the Soviet occupation of Afghanistan in the 1980s" (Davies/Kent, p. xi).

Two of the maps carry the Russian air defense grid ("setka PVO") printed in pink. Although the general terrain evaluation maps and operational maps produced at the smaller scales of 1:1,000,000 and 1:500,000 were not usually marked as classified (larger-scale maps were routinely labelled "Secret" or "For Offical Use"), all General Staff maps de facto constituted closely guarded military material, none of which became available in the West before the end of the Cold War in the early 1990s.

Light traces of folds and occasional wrinkles and small edge flaws, but altogether in excellent condition. 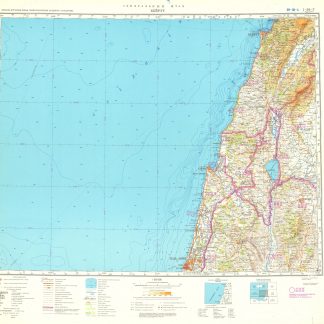