Greene, Graham. The Third Man and The Fallen Idol.

In the preface Greene states that "'The Third Man' was never written to be read but only to be seen." Indeed, the novella was written as something of a screen treatment, a precursor to the screenplay he would ultimately write for the film adaptation, and not published until after the movie premiered. The 1949 film was directed by Carol Reed and starred Joseph Cotten, Alida Valli, Orson Welles, and Trevor Howard. Garnering three Academy Award nominations and winning for Best Cinematography, the film is considered "a bona fide classic" (Maltin) and was voted the greatest British film of all time in the British Film Institute's 1999 survey.

Greene writes in his second preface, "'The Fallen Idol' unlike 'The Third Man' was not written for the films. That is only one of the many reasons why I prefer it. It was published as 'The Basement Room' in 1935". This short story serves as the source material for the 1948 British film "The Fallen Idol", another critical success and again directed by Reed, starring Ralph Richardson. 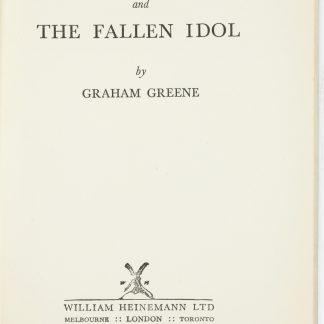