Folio (300 x 406 mm). Italian manuscript on vellum and paper. 233 ff., text in two columns of 50 to 56 lines, ornate lettering. The first 216 ff. consist of quires of 6 ff., each comprising 2 outer leaves of vellum in which are inserted 4 ff. of paper. The last 17 ff. have 7 vellum leaves. Two additional vellum leaves for the endpapers. Numerous finely drawn red and blue initials and 38 initials and colour and gilt. Bound in early 18th century full vellum.

First part (of two) of Bartolus's commentary on the Infortiatum, the second part of the Digest or Pandects. The subjects under discussion in this part include matrimonial law, divorce, dowries, guardianship, wills, and intestate succession. This early 15th century manuscript is finely illuminated with initials in colours and gilt; the opening initial shows a jurist handing a scroll to a woman. The manuscript is remarkable not only for the additional commentary provided in the margins by a contemporary scholar, but also for the numerous occasional drawings he has casually sketched in the margins, often of a whimsical and sometimes drastic nature: there are several expressive caricatures and grotesque faces; a passage discussing a recovery of the dowry following a divorce shows a man plunging a dagger into the head of his (ex-)wife.

Explicit on fol. 229: ''Explicit prima pars lecture Bartoli super Inforciato. Deo gratias et beatissime Marie ejusque genetrici et virgini Katerine''. The 1406 date on the binding does not appear in the explicit and may be taken from the 5 pages of glosses and text added at the end.

Bartolus de Saxoferrato (1313/14-57), who taught at Perugia and Pisa, was one of the principal authors in the transmission of Roman law. His commentaries on the Code of Justinian were frequently republished until the 17th century. The Manuscripta Juridica database hosted by the Max-Planck-Institut für europäische Rechtsgeschichte lists about 40 copies of this first part preserved in public libraries up to the year 1500.

Margins a bit trimmed (occasionally touching marginalia). Provenance: from the manuscript collection of Thomas Phillipps, with his MS no. 4420 on the front vellum flyleaf; sold at Sotheby's sale of his collection held in June 1908 (lot 68). 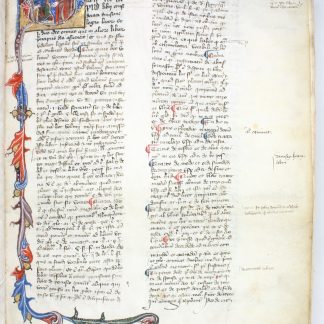