General nautical chart of the entire Red Sea with the coastlines of Hejaz and Yemen, as well as Egypt, Nubia, Sudan, and Abyssinia, prepared by the British Admiralty.

The chart details the Gulf of Suez and the Gulf of Aqaba, the Sinai Peninsula, the Strait of Jubal, and the open sea in its entirety, including several archipels like the Farisan and Hanish islands, concluding with the Strait of Bab-el-Mandeb and the westernmost part of the Gulf of Aden. It features many details ashore including the Hejaz Railway, the river Nile and the Nubian desert. Among the most prominent labeled cities are Suez, Yenbo, Jidda, Lith, Medina, Mokka, Aden, Khartum, and Port Sudan.

The British Admiralty has produced nautical charts since 1795 under the auspices of the United Kingdom Hydrographic Office (HO). Its main task was to provide the Royal Navy with navigational products and service, but since 1821 it has also sold charts to the public. The present chart was composed after Admiralty surveys up to 1884; it was first published in 1885 and saw several corrections up to 1928.

With a single fold. A few manuscript notes and a stamp "Increase 50%" near title. Captioned in print and in a former collector's hand on verso. Two tears in the left and right margin at the centrefold; remains of old adhesive tape in an attempt to repair the tear; a few smaller marginal tears. 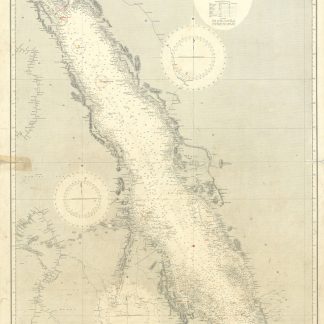