[Hydrographic Office]. Harbours and Anchorages in the Red Sea. No. 923.

Nautical chart of Perim Harbour, Beilul Bay and the Rakhmat Island anchorage in the Red Sea, prepared by the British Admiralty. The island of Perim divides the Strait of Mandeb into two channels. The island, as a dependency of Aden, was part of the British Empire between 1857 and 1967.

Perim encloses a deep and comparatively large natural harbour on the southwestern coast. The chart labels the pilot's and coal agent's houses, piers, coal stacks, the hospital, the Lloyd's signal station, and leisure facilities like a tennis court and a cricket ground. Other prominent places on the island include the fishing village of Meyun, Murray Point, William Bay, the old fort, and a parade ground. The two smaller maps of Beilul Bay and Rakhmat Island detail lava formations, mangroves, and swamps.

The British Admiralty has produced nautical charts since 1795 under the auspices of the United Kingdom Hydrographic Office (HO). Its main task was to provide the Royal Navy with navigational products and service, but since 1821 it has also sold charts to the public. The present chart was composed after Admiralty surveys of 1885; it was first published in 1886 and saw several corrections up to 1919. Captioned in former collectors' hands on verso. 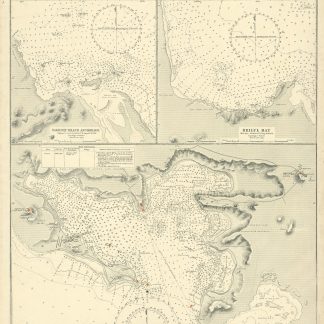