A political article written for publication in the "Volksstaat", the official newspaper of the Social Democratic Workers' Party, edited by Wilhelm Liebknecht in Leipzig. Marx, writing as "Secretary of the General Council of the International Working Men's Association for Germany", defends himself against false reports published by the "Paris-Journal" concerning supposed anti-German tendencies among the French members of the "International". Only a few weeks earlier, on 26 February, the Treaty of Versailles had ended the Franco-Prussian War of 1871.

"The Paris-Journal, one of the most successful organs of the Paris police press, published an article in its March 14 issue, under the sensational heading 'Le Grand Chef de l'Internationale' [...]. 'He', begins the article, 'is, as everyone knows, a German, what is even worse, a Prussian. He calls himself Karl Marx, lives in Berlin, etc. Well now! This Karl Marx is displeased with the behaviour of the French members of the International. This in itself shows what he is like. He finds that they continually spend too much time dealing with politics and not enough with social questions. This is his opinion, he has formulated it quite categorically in a letter to his brother and friend, Citizen Serraillier, one of the Paris high priests of the International. Marx begs the French members [...] not to lose sight of the fact that their association has a single goal: to organise the work and the future of the workers' societies. But people are disorganising the work rather than organising it, and he believes that the offenders must be reminded again of the association's rules [...]'. In its issue of March 19, the Paris-Journal does indeed have a letter allegedly signed by me which [...] found its way into the London papers. [...] The letter, as I have already explained in The Times, is a brazen fake from beginning to end. That same Paris-Journal and other organs of Paris's 'good Press' are spreading the rumour that the Federal Council of the International in Paris has taken the decision [...] to expel the Germans from the International Working Men's Association. The London dailies hastily grabbed the welcome news and published it in malicious instigating leaders about the suicide of the International at long last. Unfortunately, today The Times contains the following announcement by the General Council of the International Working Men's Association: '[...] Neither the Federal Council of our association in Paris nor any of the Paris sections that it represents have ever dreamed of taking such a decision. The so-called Anti-German League, in so far as it exists at all, is exclusively the work of the aristocracy and the bourgeoisie. It was brought to life by the Jockey Club and kept going with the consent of the Academy, the Stock Exchange, some of the bankers and factory owners, and so forth. The working class has never had anything to do with it. The purpose of this calumny is immediately obvious. Shortly before the recent war broke out, the International had to be the scapegoat for all the unpopular events. The same tactics are now being repeated. While Swiss and Prussian papers, e.g., are denouncing it as the originator of the injustices against the Germans in Zürich, the French papers [...] are simultaneously reporting on certain secret meetings of the Internationals in Geneva and Berne, under the chairmanship of the Prussian ambassador, at which the plan is to be devised of handing over Lyon to the united Prussians and the Internationals for the purpose of jointly plundering it.' So much for the statement of the General Council. It is quite natural that the important dignitaries and the ruling classes of the old society who can only maintain their own power and the exploitation of the productive masses of the people by national conflicts and antagonisms, recognise their common adversary in the International Working Men's Association. All and any means are good to destroy it [...]" (transl.). Marx signs in full as "Karl Marx, Secretary of the General Council of the International Working Men's Association for Germany".

The writing of this article coincided with the formation of the Paris Commune, about which Marx later wrote that it would "be forever celebrated as the glorious harbinger of a new society" ("The Civil War in France", MEW 17, p. 362). The article was published in the "Volksstaat" on 29 March 1871 and also in other newspapers of the "International", as well as in the paper "Die Zukunft", edited by Johann Jacoby.

Tiny flaw to lower right corner of the first leaf, resulting in very slight loss to the lower loop of one letter "h". A single ink smudge by Marx's own hand; a few tiny edge tears. The headline has been crossed out by the an editor and replaced by the new title "Erklärung" ("Declaration").

Complete manuscripts by Karl Marx are of the utmost rarity in the trade. 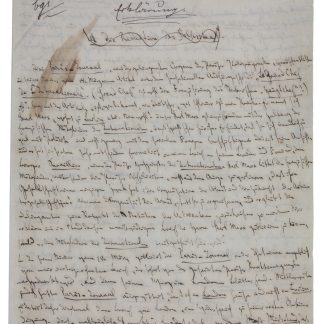