Extremely rare, controversial account of the Indian Revolt of 1857, signed by the author

Cooper, Frederic Henry. The Crisis in the Punjab, From the 10th of May Until the Fall of Delhi, by a Punjab Employe. For the Benefit of the "Lawrence Asylum".

8vo. (4), II, IV, (1), V, 154, VI, (1) pp. (including small errata leaf). With two plans of troop formation mounted in the text, including one folding. The title-page is set within a decorative frame and part of the appendix is set in Arabic script. Modern half brown calf, with gold lettering o

Very first edition, printed in Lahore in the Punjab region in 1858, of a controversial account by "a Punjab employé". This employee was Frederick Henry Cooper (1827-69), a British civil servant working with the British East India Company in the Punjab region. A very early publication on the Indian Mutiny of 1857, the present work was possibly published before, or in any case simultaneously with, the London edition of the same year. Both the Lahore and London editions are dedicated to Sir Henry Montgomery Lawrence, a British military officer, surveyor, administrator and statesman in British India, who died during the Revolt of 1857. Only the Lahore edition was, according to the title-page, published "for the benefit of the 'Lawrence Asylum'", a military-style boarding school envisaged by Sir Henry Lawrence in the Indian subcontinent highlands for the sons and daughters of British soldiers.

The Revolt (also known as the Indian Rebellion, Sepoy Mutiny, or First War of Independence) was a major uprising in India against the rule of the British East India Company. The conflict took place from May 1857 until November 1858, during which time the British brutally inflicted on the Sepoys and local Indian civilians losses of more than 800,000 people. This eventually resulted in a British victory, the end of the East India Company's rule in India, and the transfer of rule to the British Crown.

A notorious participant in the Revolt, Cooper - together with James Neill, John Nicholson and William Hodson - was responsible for the killing of some 500 Sepoys and civilians. The present work was controversial even at the time of its publication, as it includes an entirely unapologetic and almost gleeful account of Cooper's ruthless actions. Regardless of the controversy surrounding Cooper and his work and its condemnation by an MP in the House of Commons in 1859, Cooper was appointed CB by Queen Victoria in the 1860 Birthday Honours while serving in the Bengal Civil Service. Taylor places the work in context: "Cooper was Deputy Commissioner of the Punjab, based at Amritsar and, although a civilian, was responsible for the 'extermination' of the disarmed 26th BNI at Ujnalla, in particularly inhumane and unpleasant circumstances, for which he was praised and supported by his superiors but roundly condemned by many in the House of Commons when news reached London. He wrote this book to vindicate his conduct which he considered ‘prompt, spirited, and thorough’".

The title-page is signed by the author "Fred Cooper C.B.". The margins contain pencil and ink annotations, most of which give translations of terms and occasional comments on the text itself, by someone who served with the 61st Brigade and has initialled some of his notes "K.C.". Corners of the boards very slightly scuffed; outer margin of pp. 25-28 cut slightly short without affecting the text; some occasional very slight spotting. Otherwise in very good condition. 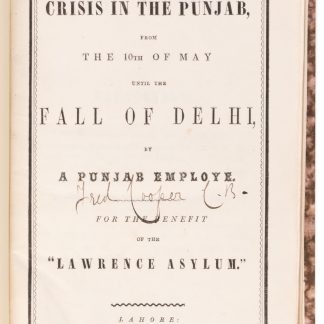