10 volumes, all in original cloth, 5 with original dust jacket.

A remarkable private collection of 10 early biographies and works supporting Gandhi, each signed by the author. While Western biographers began to take interest in Gandhi beginning with Romain Roland (1924), this collection includes only association or signed copies of works by Indian authors. Represented here are both those who had followed Gandhi from his earliest political machinations in South Africa, as well as his early followers who subsequently emigrated to America in order to raise public awareness of the Indian Independence movement. In contrast to the author-signed works of Western biographers, which can be encountered in the trade today, works signed by Indian authors of this period are notoriously rare. Includes individually: 1) Muzumdar, Haridas T. Gandhi the Apostle. His Trial and His Message. Chicago: Universal Publishing Co., 1923. Blue cloth. Inscribed "Presented to my good friend Charles E. Sekera by Haridas T. Muzumdar / Evanston, Xmas, 1924".

First edition. An exceptionally early work in support of Gandhi, addressed to American readers to drum up financial and popular support for the Indian Independence movement in the U.S. A close friend and one of the earliest biographers of Gandhi, this was Haridas's first published book, when he was just 24 years old and living in New York City.

First U.S. edition of Gandhi's famous tract, penned in South Africa in 1909 and also known under the title Indian Home Rule or Hind Swaraj. It includes his quotes "One who is free from hatred requires no sword" and "only fair means can produce fair results". This copy was presented by the editor and early Gandhi activist Muzumdar to a fellow American academic, shortly after its publication.

First edition. Dr Syud Hossain was instrumental in forging links between American-based Indian nationalists and the Indian National Congress. Co-founder of the National Committee for Indian Independence (headquartered in Washington, DC), Hossain spearheaded the Indian lobby for self-rule from abroad. "Immaculately dressed, polished in manners, brilliant in oratory, Hossain captivated his audiences from coast to coast," said A. K. Mozumdar, a colleague and fellow activist of Hossain. The Los Angeles Times described him as "the most distinguished Indian visitor in America since Tagore" while according to the New York-based Foreign Policy Association, "of the hundreds of speakers who have addressed our conferences during the past five years, none were more brilliant or authoritative than Mr Hossain". In September 1945, Hossain suggested to Jawaharlal Nehru that he return to India to work towards Hindu-Muslim harmony and stand for elections. After consulting Asaf Ali and Gandhi, Nehru cabled back: "Gandhiji thinks you can do more important work in America". Hossain briefly served as India's first ambassador to Egypt, where he died in 1949.

4) Muzumdar, Haridas T. Gandhi Triumphant! The Inside Story of the Historic Fast. New York: Universal Publishing Co., 1939. Blue cloth. Signed by Muzumdar in Hindi and in English on flyeaf.

First edition. An account of Gandhi's Rajkot Fast to protest the local ruler's refusal to enact administrative reforms in that state. The fast lasted only 3 days, 3-5 March 1939. The work also includes four original articles by Gandhi: "States and the People"; "Rajkot"; "Rajkot and Jaipur"; and "Kicks and Kisses".

5) Raman, T. A. What does Gandhi Want? New York: Oxford University Press, 1942. Yellow cloth, with original dust-jacket. Inscribed "To Dr. and Mrs. Aldridge, with sincere regard / T. A. Raman", and with a loose letter from Raman dated October, 1942, "Herewith one of the first copies of my book. It is to be published on the 29th. Please let me know what you and Dr. Aldridge think of it. With kindest regards from us both, Sincerely Yours, T. A Raman" on hotel stationery.

First edition. Educated in Madras, Raman was an Indian nationalist who emigrated to become the London editor of the United Press of India. Here, he presents Gandhi's solutions to the World War raging at the time, including remarks on Indian's participation. "Mr. Raman first met Gandhi at Marseilles in 1931 when he joined the Indian leader's staff at the Indian Round Table Conference. Thereafter he was constantly in touch with Gandhi and other Indian leaders, following them to India, where he became a close associate of Gandhi…" (dustjacket).

Second edition. An outstanding association copy, presented to the American Ambassador to India following Independence. The work is a compilation of select quotations from Gandhi to illustrate his philosophy and thought. Chester Bowles (1901-86) served as ambassador from 1951 to 1953 and enjoyed a privileged relationship with Prime Minister Nehru, who otherwise famously distrusted most U.S. influence.

7) Shridharani, Krishnalal. The Mahatma and the World. New York: Duell, Sloan & Pearce, 1946. Red cloth with original dustjacket. Inscribed "To Mrs. James B. Pratt, to Edith and to David, my American friends, a parting salute / New York, May 3, 1946" and signed by Shridharani in both English and Hindi.

First edition. Shridharani was arrested and imprisoned in 1930 for protesting the Salt Tax alongside Gandhi, and left India in 1934 to pursue degrees at NYU and then Columbia University. After campaigning for support for Indian Independence in the United States, he returned to India in 1946 where he taught at the Gujarati Sahitya Parishad, and died in 1960 in Delhi. This is an excellent association copy, inscribed to the widow of James Bissett Pratt (1875-1944, an ardent Western admirer of Tagore and an academic advisor of Shridharani), just before Shridharani left New York to return to India.

First edition, rare. The author, aware that much of Gandhi's Western popularity lay in his success appealing to Christian groups, here essentially compares the Mahatma to Jesus Christ.

First edition, extremely rare. The only other copy we have traced resides at SOAS in London. Published just following Gandhi's death on January 30th, 1948, the book contains a preface written by Prime Minister Nehru. Briefly resident at the University of Missouri, Murthy returned to India where he made a name for himself as a journalist.

First edition, signed by Gandhi's son following his father's assassination. Henry Polak (1882-1959) was Gandhi's closest friend in South Africa, having lived side-by-side with Gandhi and his family from 1903 onwards. Gandhi's second son Manilal (1891-1956) was also close to Polak and succeeded him as editor of Indian Opinion in 1916. Like his father, Manilal was a tireless campaigner and was arrested during the 1930 Salt March. This association copy of Polak's biography was signed by Manilal just a year after his father's death, during Manilal's only visit to the United States - where he sat in at a General Assembly session of the United Nations and met with Albert Einstein. In 1952 Manilal was again arrested in South Africa for protesting Apartheid, spending 38 days in jail at the age of 61. 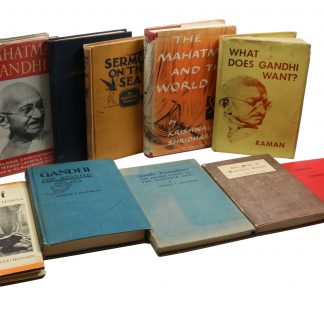