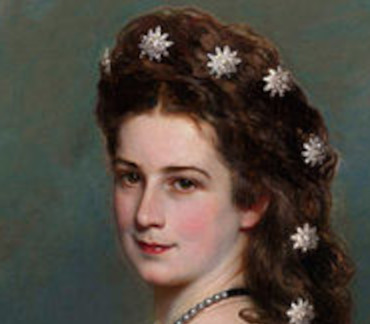 Elisabeth, nicknamed Sisi (also Sissi), enjoyed an informal upbringing. Thrusted into the much more formal Habsburg court life after marrying Emperor Franz Joseph I at the age of sixteen. she was at odds with her mother-in-law, who took over the rearing of Elisabeth's daughters, one of whom, Sophie, died in infancy. Her health suffered under the strain of the birth of Crown Prince Rudolf. The death of her only son and his mistress in a murder–suicide in 1889 made her withdrew from court duties and travel widely, so to her palace on the Island of Corfu. Elisabeth was obsessively concerned with her figure and beauty. While travelling in Geneva, she was mortally wounded by an Italian anarchist.