Twelve Miniatuzres by a Tyrolean Master

Illustrated late Baroque book of hours, written in clean and regular characters. Apart from its magnificent binding, the volume boasts a remarkable cycle of mariological illustrations. The washed ink drawings are evidently the work of a trained artist whose workmanship were fully abreast with contemporary style and technique (including the occasional Rocaille touches). Especially the elegant treatment of the figures and the fine execution of landscape and details of clothing and interiors suggest one of the more significant mid-18th century Tyrolean painters; the characteristic faces with their pronounced eye areas are so similar to those known from the work of Joseph Adam Ritter von Mölk (1718-94) and his circle that an attribution appears justified.

The dated ms. ownership at the beginning ("Soc. Stae. Ursulae oenipontani 1751") locates this manuscript with the Ursuline monastery at Innsbruck, for whom it was probably drawn up in the first place. The Baroque décor of the monastery and church, founded in 1691, was entirely destroyed in the 19th century. 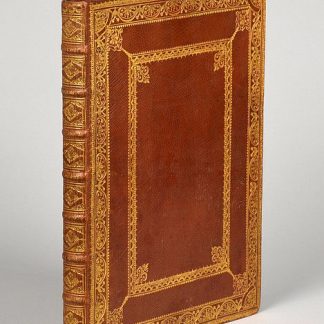