One of the first Sanskrit works published in Germany

Rare; one of the first Sanskrit works published in Germany. Lithographed throughout (with the exception of a single letterpress page at the beginning of part 2) and published at the author's expense: "Alles über Umdruck lithographisch gedruckt" (Winkler). Contains the earliest (partial) edition of the Bhagavadgita (in part 2), pre-dating August Wilhelm Schlegel's edition - admittedly better printed - by several years. The former Benedictine monk Frank (1770-1840), an admirer of Persian philosophy, studied oriental languages in Paris and London. In 1821 he took the chair of Indian and Persian at Würzburg University and went to Munich in 1826 as Professor of Sanskrit. In spite of his pioneering work, he exerted little influence on the development of linguistics and Sanskrit studies, probably due to his penchant for mysticism and his laboured, nebulous prose (cf. ADB).

Boards worn; some browning and staining as common. From the library of Swedish antiquarian bookdealer Björn Löwendahl (1941-2013). 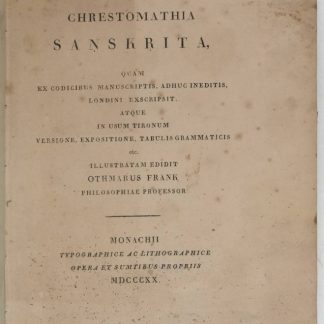