To his daughter Svetlana, co-signed by the members of his Politburo

8vo. 1 p. in red and blue crayon, with the sketch of a Soviet seal.

To his thirteen-year-old daughter Svetlana, a letter facetiously couched as a party circular: "Do not copy. [Copies go to:] 1) Stalin, 2) Voroshilov, 3) Zhdanov, 4) Molotov, 5) Kaganovich, 6) Khrushchev.

Brief no. 8: En route to Zubanovo. Leaving you to your own devices. You are instructed not to lose your sense of direction. Chin up! - Signed by all secretaries as indicated above: with submission, poor Stalin / Kaganovich / Khrushchev / Zhdanov / V. Molotov for the Ukraine / Voroshilov". Svetlana Iosifovna (Stalina) Alliluyeva, born in Moscow in 1926, died in Richland Center, Wisconsin, USA, in 2011.

Weak trace of a horizontal crease; torn from a notepad leaving an irregular upper edge (loss of an additional line referring to the purported "recipients"). Very well preserved document of Stalin's private family life (pervaded by the formulae of party bureaucracy) near the end of the Great Purge. 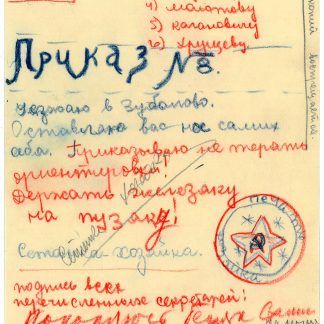