The Arabic primer of an Algerian Muslim leader

Widely received introduction to Arabic by L. J. Bresnier (1814-69), a disciple of Silvestre de Sacy and the first professor of Arabic in Algiers.

Some insignificant foxing to margins, but a fine copy in a unique binding, from the library of the Algerian essayist and Muslim leader Mourad Kiouane, a participant in the World Muslim Conference held in Karachi in February 1951 (with his ownership stamps). Even many leaders among the Algerian Muslims of the 1950s, educated by the French colonial system, spoke good French but only Algerian Arabic rather than the standard variety, which hampered their ability to converse with the leaders of other Arab nations. Famously, Algeria's first president Ahmed Ben Bella broke out in tears when invited by Nasser to speak for the first time before an Egyptian audience, but finding himself unable to do so. Partly in response to this, and to promote pan-Arabism, Nasser sent droves of Arabic instructors to Algeria in the 1960s. 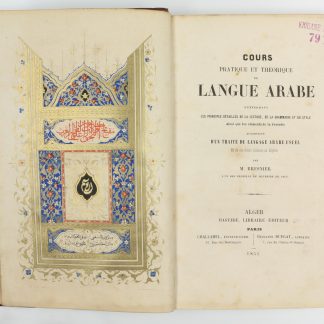