First Russian translation of Engels's important history of the German Peasants' War of 1525, begun shortly after the German revolutionary events of 1848 and published in a series of articles in Neue Rheinische Zeitung. This was the first work to argue that the reasons for the uprising had been socio-economic, rather than cultural or religious. It also deduced from its failure the need for collaboration between the peasants and the urban proletariat. The present edition contains a translation of Engels's new preface written in 1874, for the third 1875 edition, as well as a preface by the editor, which cites a letter written by Engels shortly before his death. Aleksandr Finn-Enotaevskii (1872-1943) was a noted Russian Marxist who fled abroad after being arrested and collaborated with the Bolsheviks and Lenin himself; after 1917 he was closer to the Menshevik faction. He was prosecuted during the Stalinist repressions of the 1930s.

Not in the Bernstein-Souvarine catalog. This copy has a curious provenance: an undocumented Russian student organization in a small Saxon town, possibly allied with revolutionary tendencies. Rare; KVK and OCLC only locate the copies at Bibliothèque de Genève and IISG. Not at the Russian State or National Libraries. 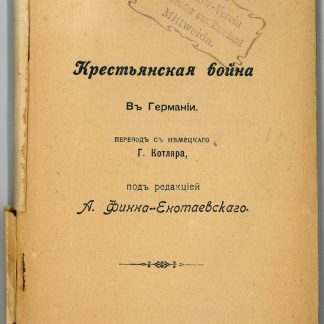