[Lenin (Vladimir Ilyich Ulyanov)]. - Bureau of International Revolutionary Propaganda (ed.). Lessons of the Revolution by Vladimir Oulianow (N. Lenin), President of the Council of People's Commissars. Translated from the Russian original, with Introduction and Appendix, and published by the Bureau of International Revolutionary Propaganda attached to the Commissariat for Foreign Affairs of the Provisional Workmen's and Peasants' Government of the Russian Republic. Russian Revolutionary Pamphlets.

English translation of Lenin's article ("Uroki revoliutsii"), written in late July 1917 and first published in mid-September with an added postscript reflecting on the events of August 1917. During a period when the future form of governance was still undecided, Lenin's pamphlet promotes the idea of the "Soviet" (workers' council) rather than parliamentary democracy. Importantly, the appendix presents one of the first English overviews of the new political reality, defining and discussing such terms as the "Essers," "Mensheviks," "Fist (Kulak)," and "Soviet." The booklet was first published in 1917 by the same publisher (34 pp.); the second edition is presumably updated to reflect political developments in the interim. The pamphlet was also reprinted in San Francisco in 1919 by the People's Institute. This 1918 edition is quite scarce, with KVK and OCLC showing copies at the Danish National Library, Friedrich-Ebert-Stiftung, Harvard (Houghton Library), and Zurich.

A very good copy of a fragile title. 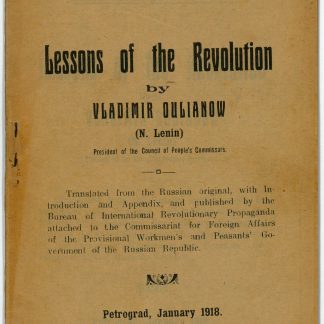