4to. 11 volumes. With a folding table in vol. 8. Contemporary vellum, numbered in manuscript on the spine, red sprinkled edges.

Complete set of a compilation of all resolutions, ordinances, treaties and other statements and motions by the States General of the Dutch Republic, regarding all maritime matters. The collection starts in 1597 with the establishment of the five admiralties in the Dutch Republic and ends in 1771, although a few resolutions from the period of Habsburg rule (the oldest from 1487) have been included. Most of the resolutions concern trade, including the trade with the Baltic, East and West Indies, North Africa and the Turkish Empire, but also fishery, the equipage of battleships and the administration of the colonies in the West Indies, including slavery. Several tables give interesting information regarding the costs of the building and outfitting of ships and the formation of regiments for the colonies. One very large table presents the tariffs for all sorts of products, including numerous types of wood, glass, porcelain, fish and furs.

A collection of resolutions had been previously published in two volumes in 1689 and 1694. In 1701 an expanded volume 2, present in the current collection, was published, with volume 3 following in 1721. Interestingly, a new and much expanded volume 1 was published in 1730. The present set, published during a course of over 70 years, includes these expanded editions of volumes 1 and 2. All indexes have been bound in the corresponding volume, instead of in a separate index volume.

With the bookplates of the collector Jan Willem Six de Vromade (1874-1936), a descendant of the politically and culturally significant Six family, in the first volume, and of the Dutch politician and historian Leonard de Gou (1916-2000) in all volumes. Bindings slightly smudged. Somewhat browned and stained throughout, most notably volume 8, and with a small tear in the front flyleaf of volume 6. A very good set of an important source for Dutch maritime history. 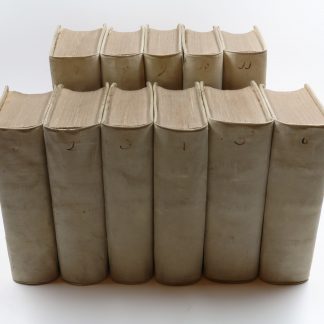