4to. 63 ff. Copying pencil on grid paper with several corrections and deletions. Stored loosely in a folded sheet with holograph title. Within a cardboard folder (addressed to Friedell in Kufstein, Tyrol, with receipt stamp dated 13 Sept. 1935), captioned in red crayon by an unidentified hand: "Friedell Original-Handschrift zur Zeitmaschine". Sender partly erased, but identifiable by the address (Berlin W. 55. Potsdamerstr. 122) as the publisher Paul Zsolnay Verlag.

Original manuscript of the unfinished first draft of Friedell's science fiction novella "Die Reise mit der Zeitmaschine", a wry homage to H. G. Wells's 1895 classic "The Time Machine" which purportedly reproduces the Time Traveller's narrative of his later journeys. Friedell signs his name repeatedly in the spoof correspondence between himself and Wells. As the cardboard envelope shows, Friedell had sent his manuscript to Zsolnay in the autumn of 1935, but was apparently turned down - since Hitler had seized power in 1933, German and Austrian publishers had become wary of Jewish authors, and none dared handle a work by so conspicuous a member of the Viennese fin-de-siècle cabaret and café culture reviled by the Nazis. Nevertheless, Friedell extensively revised his manuscript, and the later version was published from his posthumous papers by R. Piper & Co. early in 1946, eight years after the author's suicide and only months before Wells's death (the book bears the military censorship imprint, "Published under Military Government Information Control License [...] 6870th District Information Services Control Command, U.S. Army"). An English translation, by Eddy C. Bertin, appeared in 1972 ("The Return of the Time Machine", New York: DAW Books). Two years later, this unique piece of German-language science fiction was re-published by Diogenes in Switzerland, who have kept it in print ever since ("Die Rückkehr der Zeitmaschine", last reprinted in 2009).

The present first version (dedicated to "All Kantians!"), which differs markedly from the published text, has hitherto not been studied. The developed story ends at the point at which the Time Traveller picks up the Sunday Times (corresponding to the ninth of the eleven chapters of the printed version). Several closely written additional pages contain further colour-coded notes, fragments and keywords for use in the subsequent narrative, some of which are so prophetically accurate that the present-day reader can hardly resist the notion of Friedell having stepped into a Time Machine of his own: "the future: radioactivity, smashing the atom [...] Einstein". 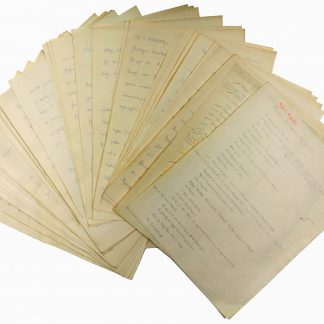