Arabian astrology after a Castilian manuscript

Second Henricpetri edition of this elaborate system of astrology, edited by Antonius Stupa. Abul Hasan Ali ibn abi Rijal (also known as Haly or Hali, and by the Latinized versions of his name, Haly Albohazen and Haly Abenragel), probably born in Cordoba, flourished in Tunis from ca 1020 to 1040, where he served as court astrologer to Prince Al-Muizz Ibn Badis. His "Distinguished Book on Horoscopes from the Constellations" enjoyed a great reputation, and he was celebrated as "Ptolemaeus Alter" and "summus astrologus". The work was translated from Arabic into Castilian by Judah ben Moses, upon orders of King Alfonso X of Spain, and - in 1485 - from the Castilian into Latin, by Aegidius de Tebaldis and Petrus de Regio. A manuscript copy containing five of the eight books of a translation into Old Castilian by Yehuda ben Moshe Cohen survives in the National Library of Spain. "De Judiciis Astrorum", a Latin translation of the Old Castilian manuscript, was first published in Venice in 1485 and became an important source in Renaissance Europe for the understanding of medieval astrology.

Spine and binding repaired; some duststaining to the first pages. Entirely complete: VD 16 cites 20 ff. of prelims in error; all digitized copies entirely agree with the present specimen. Removed from the Ampleforth Abbey library in North Yorkshire with their bookplate to pastedown. A good copy. 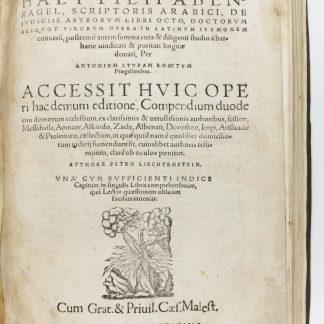