The Port of Beirut, linking East and West

Large 4to. All 31 issues, comprising a total of 774 pp. (some lithographic, others published as a typescript, but mostly letterpress), preserving the original printed wrappers. With 2 folding plans. Bound in 1920s green half calf over marbled boards.

Rare collection of the annual reports published by the administrative board of the Beirut Port holding company: the complete stretch from 1889 (when work on the harbour began) to 1922.

Even since the 1860s, the old harbour of Beirut, 150 by 100 metres in length and a mere two metres deep, was rapidly becoming too small for the ever-expanding volume of traffic. In 1887 a consortium was formed of the Compagnie Impériale Ottomane de la Route Beyrouth à Damas, the Ottoman Bank, the Comptoir d'Escompte de Paris, the Banque de Paris et des Pays-Bas, and the Compagnie des Messageries Maritimes. Reincorporated as the Paris-based "Compagnie Impériale Ottomane du Port, des Quais et Entrepôts de Beyrouth", they obtained a concession from the Porte in 1888, and construction was completed in 1895. "The new harbor, located further to the east, provided deeper anchorage (two to six meters) next to an 800-meter-long pier running almost parallel to the coast and protected by a breakwater 350 meters long. The dock area covered twenty-one hectares, with vast warehouses whose metal cladding had been designed by Gustave Eiffel" (Kassir, p. 119). Located at the intersection of Europe, Asia and Africa, Beirut quickly became one of the principal ports between Europe and the Near East. Trade was hampered during the years of the First World War, but Beirut still received "more ships than any other port along the Syrian coast" (ibid., p. 122).

The first seven reports, covering the building phase, from 1889 to 1894, are printed as lithographs; from 1895 onwards they are letterpress, providing a full account of assets and liabilities, profits and losses, and resolutions adopted by the board, accompanied by extensive sets of tables. The publication was interrupted only in the war years, when the company was temporarily dispossessed, for which time the present volume instead contains a "Historique" and a "Memorandum", both published as typescripts. The series was resumed in 1921.

This collection bound for the "Banque de Syrie et du Liban" with their bookplate on the pastedown. Binding rubbed and chafed, but internally a very well-preserved set. 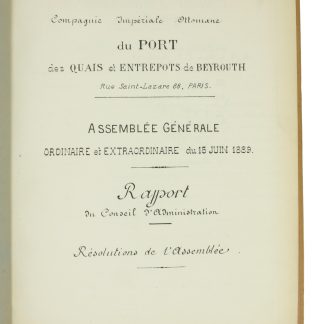