An exceedingly rare travelogue of the first ever voyage of the Ottoman navy to the American continent, albeit accidental. Thrown off their course to Basra by a storm on the Atlantic near Cape Verde, the two Ottoman warships Bursa and Izmir were dragged in the opposite direction, to Rio de Janeiro. This lively account by the Turkish engineer and naval officer Faik Bey describes all the stages of the corvettes' 13-month journey, their voyage from Istanbul across the Mediterranean Sea to Cadiz, on to the Canary Islands and the Cape Verde Islands, and the fierce storm that brought them to the shores of Brazil, where they laid anchor at the port of Rio de Janeiro before setting sail again two months later. They visited many ports and countries including the Cape of Good Hope, Mauritius, Muscat, Bombay, and Iran, before finally reaching Basra in November 1866. Faik Bey gives a personal account of what must have been an exciting but strenuous journey, while also reflecting on the economic conditions in the Ottoman state and the Islamic world at the time.

Extremely rare; we were not able to trace a single library copy. A second edition was not published until 138 years after the first, in 2006 (Istanbul, Kitabevi).

A second account of this voyage, written by Imam Abdurrahman Efendi, who remained in Brazil for a while before returning to Istanbul, was published in 1871. It only briefly mentions the voyage to South America, instead focussing on the author's time in Brazil and his return journey.

An intriguing documentation of an unplanned visit to the New World. 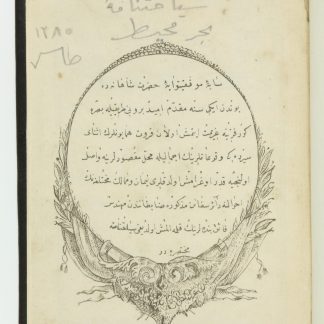