The present correspondence archive includes, among many other items, 6 letters or cards by Peter Altenberg, 1 by Richard Beer-Hofmann, 10 by Lili Darvas, 2 by Kasimir Edschmid, 13 by Anton Faistauer, 1 by Egon Friedell, 1 by Heinrich Friedjung, 1 by Hermann Hesse, 54 by Max Kalbeck, 1 by Alma Mahler-Werfel, 3 by Ernst Matray, 1 by Max Mell, 5 by Princess Clementine Metternich-Sándor, 1 by Bella Paalen, 2 by Alfred Polgar, 1 by Erich Reiß, 74 by Ernst Schütte, 1 by Rudolph Slatin-Pascha, and 1 by Max Slevogt.

A very extensive segment of 92 letters is formed by the correspondence with Josef Maria Auchenthaller, amplified by 29 from his wife Emma and 15 from their daughter Maria Josepha, who took her own life in 1914, aged only 20. In a highly interesting autobiographical typescript written a year or two before her death, Gusti Adler recounts how her own family met that of the famous artist and how she, then only 14 years old, had fallen in love with Auchenthaller, 25 years her senior.

Gusti Adler, born in Brixen in 1890, was the daughter of the painter Maria Adler and the country squire and later journalist Heinrich Adler, brother of Victor Adler, the founder of the Social Democratic Worker's Party of Austria; her sister was the artist Marianne Adler. Trained as a sculptor under Richard Kaufungen in Vienna, she later focused on painting as well as on arts and crafts, in 1913 beginning to write criticism for the "Wiener Fremdenblatt". After relocating to Berlin she wrote for Viennese and local newspapers, using the pseudonym "Christoph Brandt", and edited works by Jean Paul and Georg Forster.

Through the intermediation of her childhood friend Helene Thimig she met Max Reinhardt in 1919 and soon embarked on a two-decade-long career as his private secretary and aide, organising not only the numerous details of the great director's private life but also most of his theatre productions, especially at the Salzburg Festival. In 1939 she followed Reinhardt to the USA and was an active member of his "Workshop for Stage, Screen and Radio". After Reinhardt's death in October 1943 she joined the documentation department of Warner Bros. in Hollywood, where she remained until her 80th year.

In 1946 she published her biography of Max Reinhardt, followed in 1980 by the sequel "… aber vergessen Sie nicht die chinesischen Nachtigallen". Gusti Adler passed away in Hollywood in 1985.

A detailed catalogue is available. 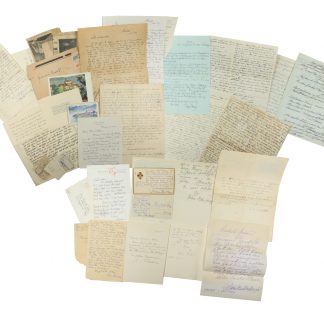