William Henry McGarvey and the oil boom in Galicia

Unique, luxurious testimony to the late 19th and early 20th century oil boom in Galicia and to one of its central protagonists. Three watercolours on the title-page show a view of Mariiampil (in present-day western Ukraine), where McGarvey had built his first refinery in Galicia, McGarvey’s "first home" in the region, and an oil well in the now Polish village of Wietrzno. This is followed by three pages of a laudatory address in German, Polish, and English, all with floral art-nouveau borders and initials. McGarvey is hailed as a technological innovator whom fate "across the Ocean" to his new home 19 years ago.

Since the album was commissioned by McGarvey's local business partners and competitors, emphasis is placed on his fairness and on his unfailing attention the oil industry: "you never ceased to care for the whole oil industry, and you became a friend and protector of the small, even the smallest oil producers and refiners, you were the adviser and promoter of every single workman, you became the benefactor of our country Galicia". The remainder of the album offers the signatures of more than 150 congratulators (with several business stamps) on five leaves. This is a valuable document of the Galician oil industry in general and of the significant involvement of Jewish businessmen in particular.

William Henry McGarvey (1843-1914) became probably the most successful oilman of Galicia through the introduction (in 1883) of the Canadian "pole tool" drilling system that allowed for oil exploration at previously unheard-of depths and speed. His "Galizische Karpathen-Petroleum-AG", headquartered in Vienna, was among the most lucrative companies in the Austro-Hungarian empire and made multimillionaires of McGarvey and his British partner John Simeon Bergheim. In 1908, McGarvey was knighted by Emperor Franz Joseph for his innovations that had enabled Austria-Hungary to become a net oil exporter. Retreating Russian troops who briefly had occupied Galicia in the first months of the First World War set fire to Galicia's oil wells and blew up the refineries, effectively destroying the oil industry and McGarvey’s business.

The splendid album was designed and executed by the Austrian painter and illustrator Erwin Pendl (1875-1945). Minor foxing to the title-page and the first page of signatures: occasional light stains. Well preserved with only very minor scratches and flaws to the upper cover. 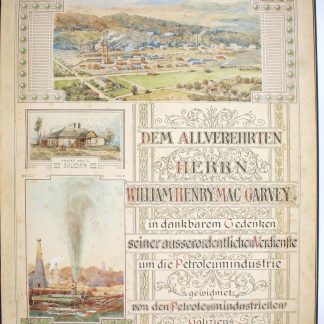