Extremely rare Italian edition of the famous travel report given by the Arab merchant Suleiman al-Tajir, who had visited China and India in the 9th century. His book is the oldest Arabic account of China, written more than 400 years before Marco Polo. This is augmented by the "Silsilat al-Tawarikh" of Abu Zayd al-Hasan al-Shirafi, written in the early 10th century and based on the account of Ibn Wahb al-Basri, who had visited China shortly after Suleiman.

The translations from the Arabic are in two parts: the first part (pp. 25-55) written by Suleiman or from his accounts; the second part (pp. 56-104) the supplement by Abu Zaid Hasan. The remainder of the text is a translation of the contributions of Eusèbe Renaudot, whose French version was translated by Abondio Collina (cf. Melzi). According to Renaudot, based on events such as the great revolution which swept across China during their second voyage, there is no reason to doubt that the journeys were undertaken four centuries prior to Marco Polo’s. Their travels took place in 851 AD and 877 AD, respectively. The text gives a lively account of life in China and India, with "the first foreign descriptions of tea and porcelain, and a whole panorama of Chinese society, from the Son of Heaven and Confucian ethics down to toilet paper and bamboo urinals" (Mackintosh-Smith). Later Arabic geographers such as Ibn Khordadhbe and al-Mas’udi relied heavily on this work for their information on India and China. "Ces relations sont de la plus haute importance pour la connaissance de l'Inde et de la Chine au moyen-age" (NBG). 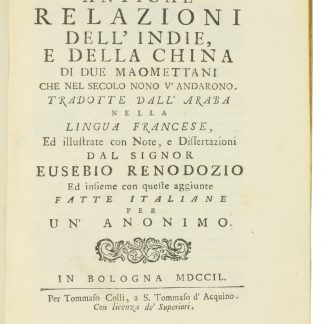