A gift from an old Hessian for a young Swabian

One of the most prominent pieces from the famous autograph collection of Carl Künzel, written on Goethe's 80th birthday: "Chaque jour est un bien que du ciel je reçoi, / Profitons aujourdhui de celui qu'il nous donne; / Il n'appartient pas plus aux jeunes gens q'uà moi, / Et celui de demain n'appartient à Personne" (a verse written in 1699 by the eighty-year-old poet François de Maucroix: "Every day is a gift I receive from Heaven / Let us enjoy today that which it bestows on me. / It belongs no more to the young than to me, / And tomorrow belongs to no one").

If one is to believe an anonymous report published in the London Athenaeum, then Künzel, barely 21 years old in 1829, "came to Weimar, entered Goethe's house, and, with all his personal and national naiveté, asked the great man's valet to hide him somewhere in the hall, that he ('a Suabian' as he called himself when the domestic questioned him about his name, &c.) might only 'have a peep' at the celebrated poet, who, he was told, would soon pass for his usual promenade. The attendant complied with Herr Kunzel's wish, and then answered his master's bell; but returned almost instantly with the message that 'his Excellency' wanted to see the traveller. Herr Kunzel, not dreaming of such an honour, felt rather bewildered; but, following the servant, who gently pushed him into 'his Excellency's' presence, he a minute later, saw the Author of Faust standing before him, tall and majestic, but stretching out a friendly hand and benignly addressing him with the words - 'The Suabian is not only to see me; I, too, will see the Suabian.' A conversation about Suabia and Schiller’s sister (a patronizing friend of Herr Kunzel’s) followed, at the end of which the tribute of one or more autographs was granted. These autographs of Goethe became the nucleus of Herr Kunzel’s present collection" (no. 1452, 25 August 1855, p. 979). Ultimately, Künzel's collection was to comprise not only this Goethean French quotation, but also a quatrain in German, Goethe's garden hat, his breakfast cup, and a quill.

Carl Künzel (1808-77), then a travelling salesman for the Heilbronn-based Rauch paper factory, kept an autograph album on his many journeys; other signatories includedBrentano, Eichendorff, Goethe, Grillparzer, Hölderlin, Mörike, and Uhland. "In 1936 it was dispersed at auction, according to its owner's wish; no buyer had stepped forward who wished to acquire the book as a whole" (cf. Mecklenburg, p. 54). Like his uncle, Carl Künzel's nephew Wilhelm (1819-96) was a passionate collector of autographs who increased the collection to "the ultimate scope of 15,233 items [...], which were auctioned after his death by List und Francke in Leipzig between 1896 and 1898 versteigert wurden" (cf. Scheible, p. 518). "These two collectors, uncle and nephew, are of especial importance for the history of the autograph business, for today's collectors and antiquarians still encounter at every step the traces of their worldly doings" (cf. Mecklenburg, ibid.). 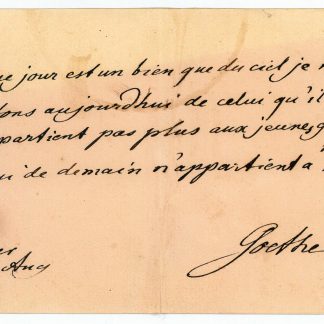