Rare art nouveau specimen book of Arabic typefaces for Arabic, Turkish, Hausa, and other languages produced by the famous German typographic foundry D. Stempel AG. Apart from the typefaces, the catalogue includes initials, geometrical and floral borders, vignettes and other ornaments, religious calligraphy, and coats of arms. The bilingual introduction advertises the typefaces both to German scholars as well as to clients in the Near to the Middle East. Among the editors of the sample texts were academics from Syria, Egypt, and Turkey, as well as the German linguist and polyglot scholar Ludwig Harald Schütz (1873-1941).

After World War I, David Stempel's D. Stempel AG had bought the famous type foundry of the printer Drugulin in Leipzig. This purchase enabled Stempel to offer types for most written languages of the world, including the Arabic typefaces for the various languages advertised in the book. 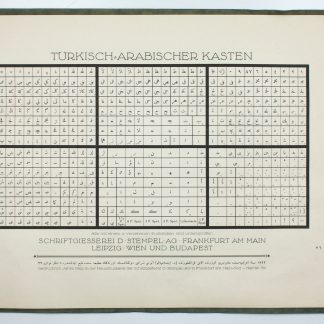