Rare map of oil concessions in the Middle East. With an inset map of the Southern Arabian Peninsula.

Rich in detail, the chart depicts the concessions of various oil companies active in the Arabian Peninsula, the largest by far being that held by Aramco since the 1933 royal concession. However, the map also shows smaller concessions, including those held by Sirip (Société Irano-Italienne des Pétroles), Kuwait Oil, and Japan Petroleum. In addition, it shows oil fields, oil and gas pipelines, pump stations, and refineries, as well as important towns and international borders.

Published as a supplement to the international outlook issue of World Oil. 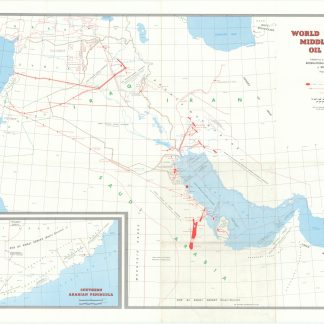