Translated from Arabic, uniting the Judaic and Islamic astrological traditions

4to. (6), 96 ff. With a woodcut initial coloured in red and green and several diagrams. Rubricated throughout.

(Bound after) II: Aristotle. Meteorologia. (Nuremberg, Friedrich Peypus, 11 Nov. 1512). 94, (6) ff. (final blank). With 8 large woodcuts in the text, some with touches of contemporary colour. Rubricated throughout.

I: Editio princeps of this "work composed in Arabic probably exactly in the form in which it is preserved in Latin, typical of the encyclopaedic period but limited [...] to certain early sources" (Carmody), uniting the Judaic and Islamic astrological traditions. The form, arranged in twelve parts according to each house, is based on the doctrines of Sahl al-Tustari. The various tracts are constructed from chapters compiled systematically from such writers as Mâshâ'allâh (including the first printing of 'De electionibus') and al-Kindi. The crucial factor that they were translated intact in their present form from Arabic "is apparent in the unified Latin style and terminology" (ibid.). The collection includes a number of quotations attributed to Ptolemy; the rare mention of "Abuali" refers perhaps to Abu 'Ali al-Khayyâj.

"Masha'allah, [a Jew from Basra,] was one of those early 'Abbasid astrologers who introduced the Sassanian version of the predictive art to the Arabs; he was particularly indebted to the Pahlavi translation of Dorotheus of Sidon and to the 'Zik i Shahriyaran', or Royal Astronomical Tables, issued under the patronage of Khusrau Anushirwan in 556. He was also acquainted with some Greek material (perhaps through Arabic versions of Syriac texts) and would have acquired some knowledge of Indian science, both through the Pahlavi texts that he read and through such Indian scientists as the teacher of al-Fazari and Kanaka, who visited the courts of al-Mansur and Harun al-Rashid. It is during al-Mansur's reign that Masha'allah's name first appears: he participated in the astrological deliberations that led to the decision to found Bagdad [...] Masha'allah wrote on virtually every aspect of astrology [...] ['De electionibus'], which quotes Dorotheus, is ascribed to Masha'allah and Ptolemy but is probably by neither" (DSB IX, 159 ff.).

Extremely rare. A very clean copy with only an insignificant inkstain in the lower margin of ff. 12v and 13r and tiny traces of worming in the upper margin of the final two leaves. A few contemporary handwritten marginalia; f. 80v has a contemporary handwritten ownership of Wigand, Baron Redwitz (1476-56), bishop of Bamberg, who as a young man had travelled to Palestine and is remembered as a conservative but not fanatical Catholic cleric during the tumultuous years of the Reformation.

Bound with this work in the same appealing Renaissance volume are two other rare, thematically related contemporary treatises.

II: Aristotle's "Meteorology", long known in the West only through a Latin translation based on the Arabic version "al-'Athar al-`Ulwiyyah". This is the very rare illustrated first edition of Faber's expanded translation, including an extensive commentary by Johannes Cochlaeus, who also mentions the recently-discovered American continent ("Nova illa Americi terra", f. 62v). Comprising the first three of Aristotle's four books (on the heavens, water, and wind), it also constitutes "one of the main sources of medieval geology" (Stillwell, Awakening 577). "Cochlaeus's discussion of the relationship between motion and heat appears quite modern" (cf. Spahn). The woodcuts, coloured in earth tones or simply accented by the rubricator, show spheres as well as light and cloud phenomena; a large woodcut (f. 60v) shows the climate zones of the ancient world.

A single, tiny wormhole in the blank lower margin throughout; another small wormhole in the first two leaves (repaired in A1, insignificant loss to a few letters in A2). A clean and wide-margined copy.

III: The first collected edition of ten astrological treatises by the 12th-century Jewish mathematician and astronomer Ibn Ezra from Tudela in Spain. During his lifetime the town was under the Muslim rule of the emirs of Zaragoza; later he lived in Muslim Andalusia. "Ibn Ezra disseminated rationalistic and scientific Arabic learning in France, England and ltaly [... He] wrote a number of astrological works that were very popular [...] all of them appeared in Latin in 1507. They are rich in original ideas and in the history of scientific subjects" (DSB).

Contemporary marginalia in red, green, and brown ink throughout. Some insignificant browning. The well-preserved binding shows a hunting scene blindstamped into the leather. A fine assembly of important natural scientific works: published by Christian editors and printers in the early Renaissance, they bring together the Muslim and Jewish traditions that were the driving forces behind mediaeval science. 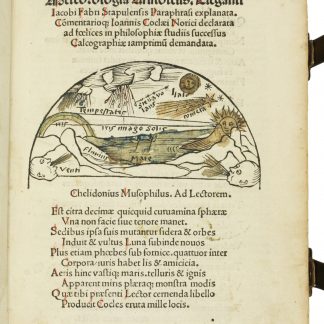